There’s a fair amount of information available in the public sphere online, including on Youtube.

The actual atelier is featured in  Luciano Emmer’s film Le ragazze di Piazza di Spagna. The film was shot in the Sorelle Fontana’s atelier near Piazza di Spagna in Rome. 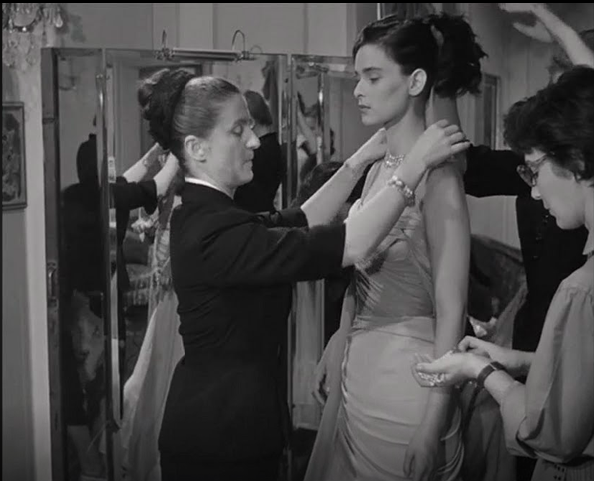 Below: Anita Ekberg, testimonial of first perfume “Glory by Fontana” with Zoe Fontana. 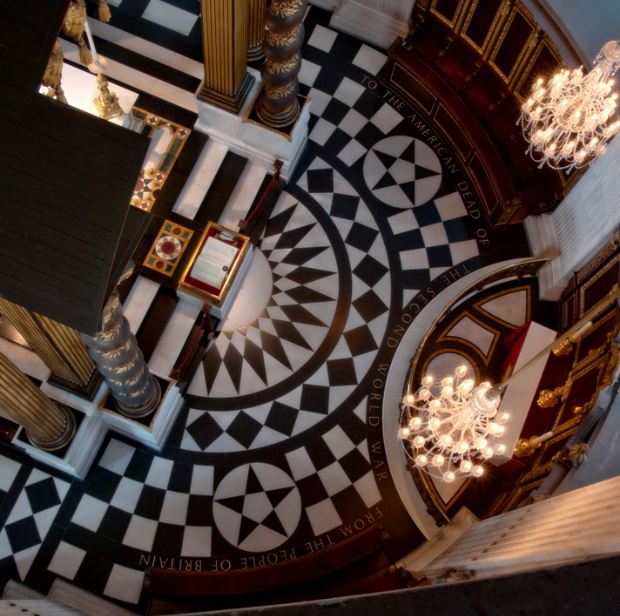 The website of  St Paul’s proudly states that “the UK has had a long relationship with the American people, formed largely after the Second World War, a conflict in which thousands of Americans based within the UK were to give their lives.”
The most visible striking reminder of this sacrifice and subsequent deep friendship can be found beyond the High Altar at the very east end of the Cathedral, in the American Memorial Chapel, a space rebuilt after being destroyed in the Blitz and dedicated in its entirety to the American dead of WWII.

At the heart of the chapel sits a huge, 500-page, leather-bound book; a roll of honor to the 28,000 Americans – from Aaberg to Zingale – stationed in the UK who gave their lives throughout the War. The book opens:

Defending freedom from the fierce assault of tyranny

they shared the honor and the sacrifice.

will long be remembered where ever free men live.

Thousands of the men named in the roll of honor died on the Normandy beaches on D-Day, as well as in training operations in the lead up to the campaign and in the subsequent battles on the European mainland, right up until the day on which the Allies celebrated Victory in Europe.

The book was unveiled in 1958 at a service to dedicate the Chapel, attended by The Queen and American Vice President, Richard M Nixon. 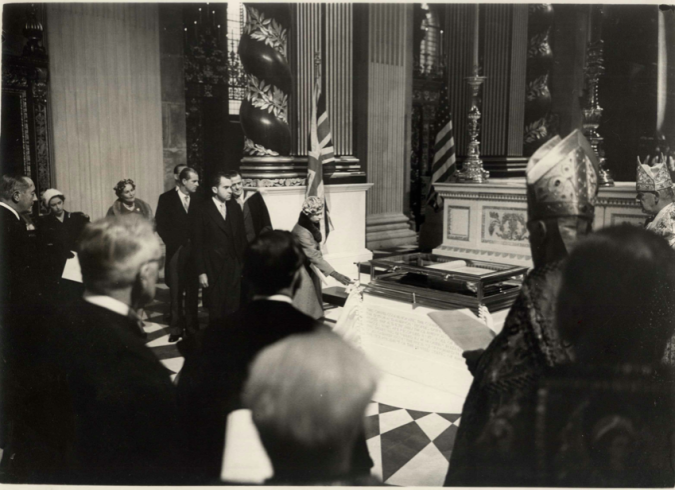 A year later, President Dwight D Eisenhower visited the Chapel and the roll of honor. Words in the book written by the President, who as a soldier commanded the Allied troops on D-Day, read:

Each name inscribed in this book is a story of personal tragedy and a grieving family; a story repeated endlessly in white crosses girdling the globe. The Americans, whose names here appear, were part of the price that free men have been forced a second time to pay in this century to defend human liberty and rights.

Fittingly, this roll of honor has been enshrined by the Mother Country of all English-speaking democracies in this special chapel of St Paul’s, once a target of barbaric attack. Here, we and all who shall hereafter live in freedom will be reminded that to these men and their comrades of all the Allies we owe a debt to be paid with grateful remembrance of their sacrifice and with the high resolve that the cause for which they died shall live eternally.

St Paul’s proudly states that the chapel itself is truly a place for all Americans. The three stained-glass windows contain the state symbols of every American state. The wood carvings contain the birds, plants and flowers of America and hidden away in one panel are a space rocket and stars – a nod to the space program that was being developed at the time the Chapel was completed.

Each November, St Paul’s holds a US Thanksgiving service, to which all Americans in London are invited. 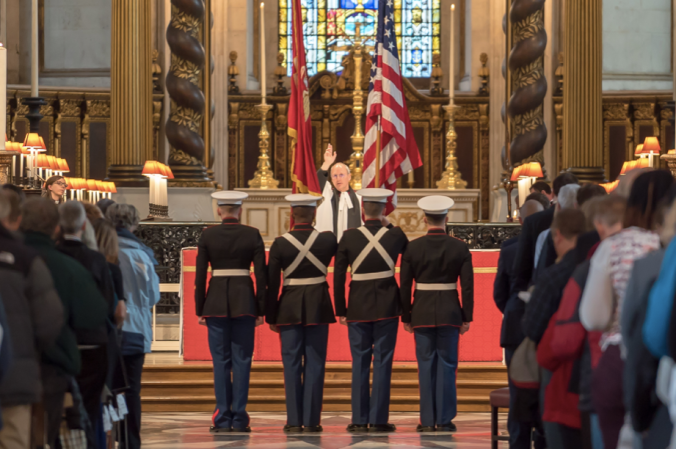 I visited this august memorial last month and was struck by its peaceful majesty.  In this calm, quiet space, the American war dead are remembered.  The inscription in the floor tells the story, simply and beautifully. It reads: “To the American dead of the Second World War from the People of Britain.” 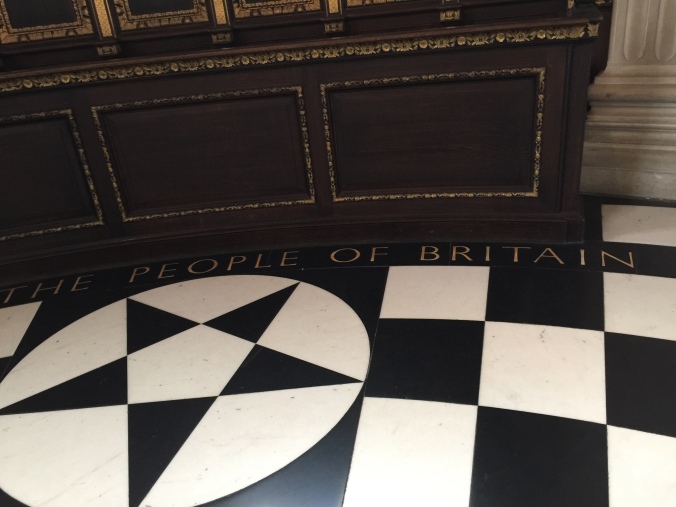 Last month I got to see the Mary Quant exhibition at the Victoria and Albert Museum in London.  It was a childhood dream to wear Mary Quant fashion.  Her work was not for sale in the small interior West American town where I grew up.  But, my mother could sew anything and she fashioned some Quant designs for me.  It breaks my heart that we didn’t keep all of those great things my mom sewed. But, they are stored in my memory and I remember how I felt when I wore them.  That suffices in a pretty big way.  Thanks mom!

But Mary Quant’s fashions, along with Twiggy and the Beatles, were a big part of my burgeoning (teenage) identity.  Well, I mean that’s obvious.  The name of my blog is from the Beatles: “Get back!” 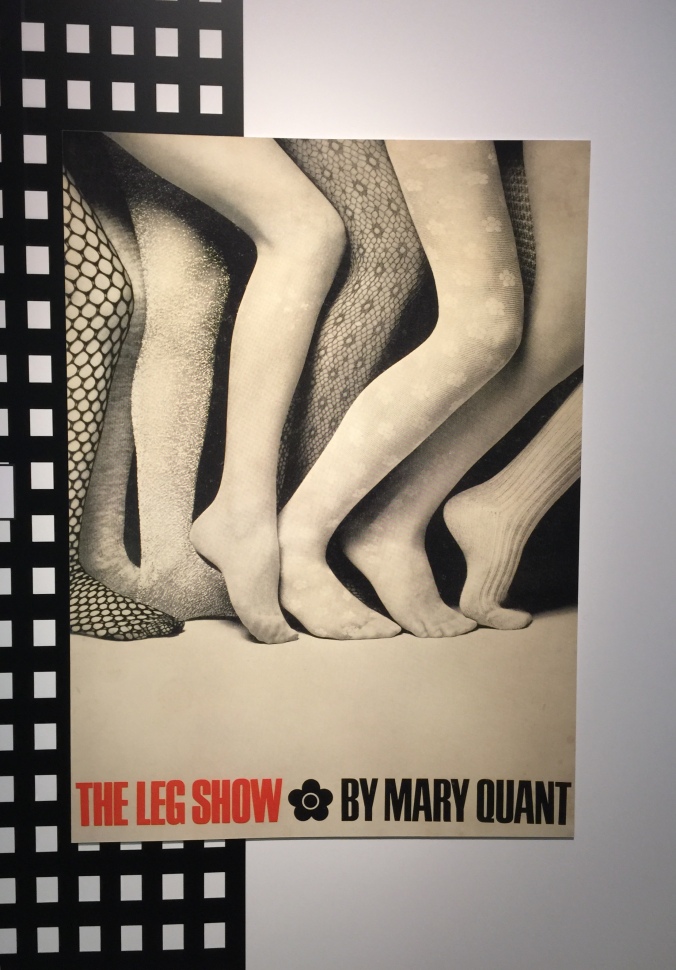 The photo above of legs and the next 3 of hair were the kind of thing that fired my imagination.  I couldn’t buy her fashions in South Dakota in the 1960s, but I could wear the tights and haircuts she inspired!  And I did! 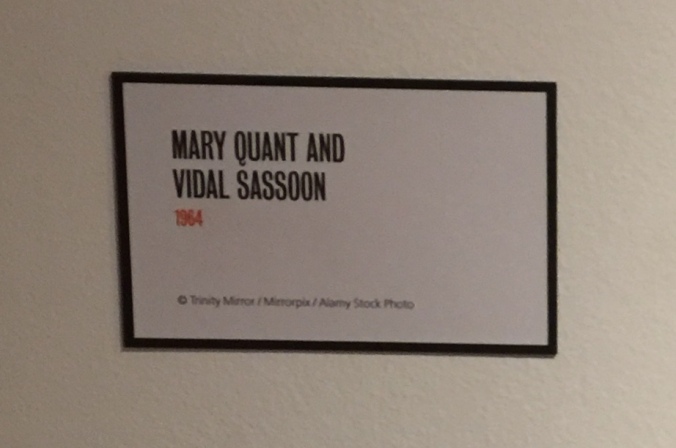 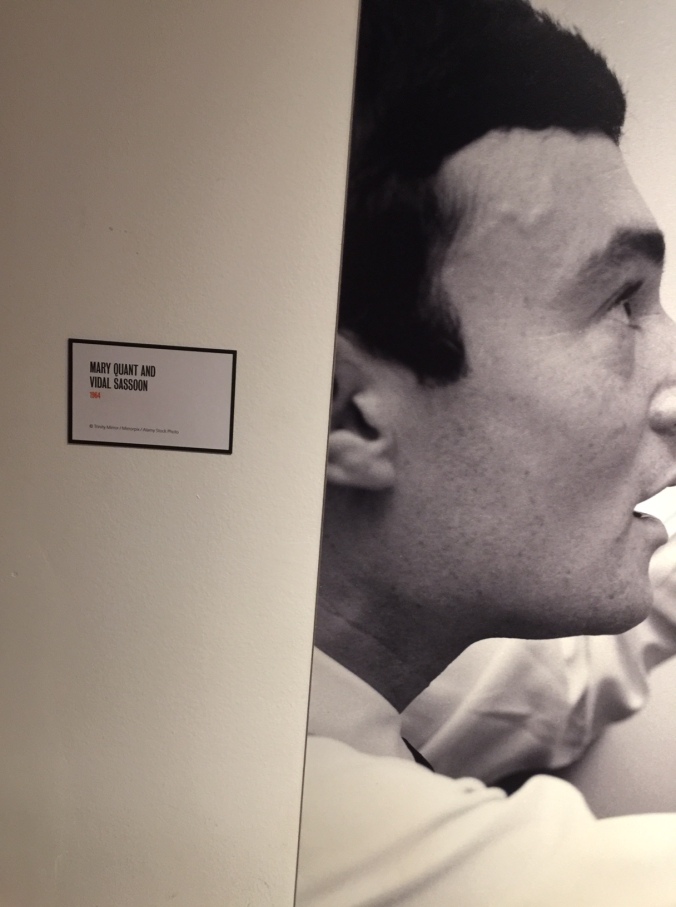 The rest of my pictures of the V & A exhibition are in no particular order.  It was a great and very fun show, and I loved seeing and snapping pix of it. 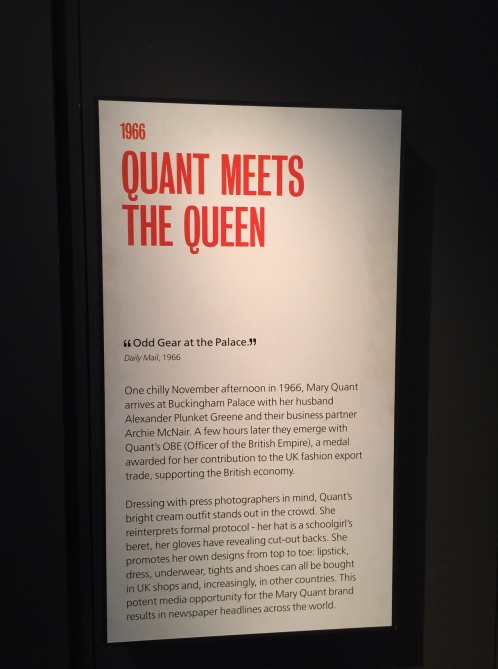 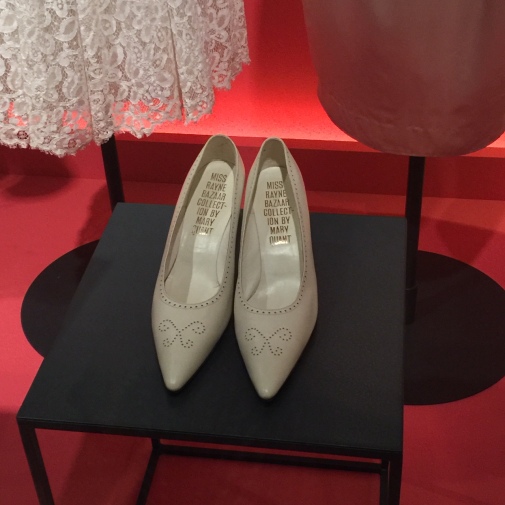 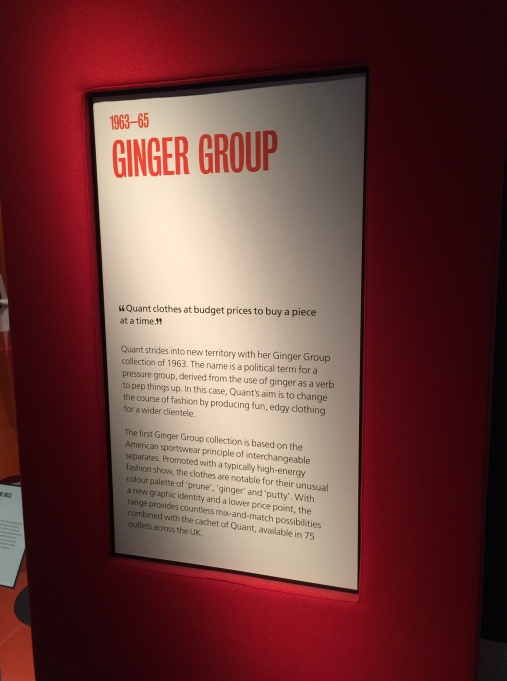 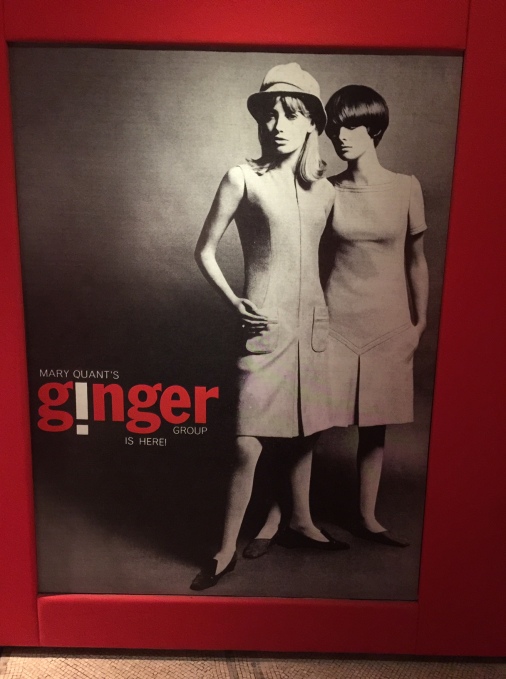 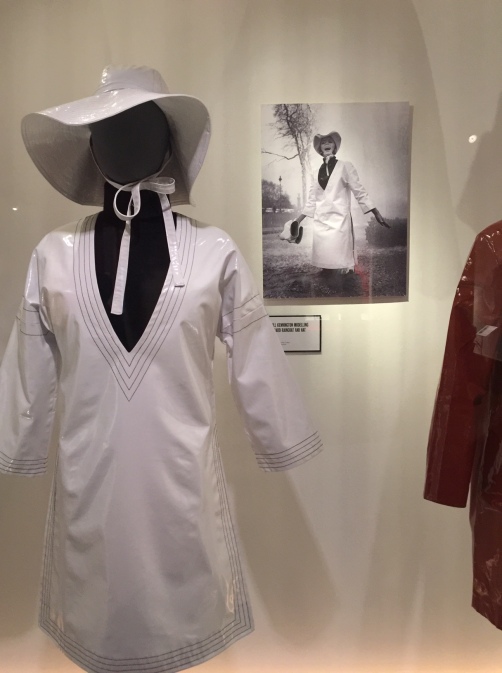 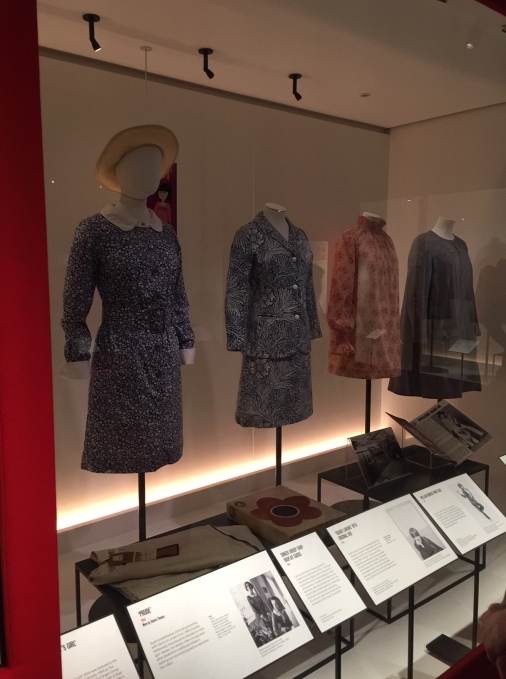 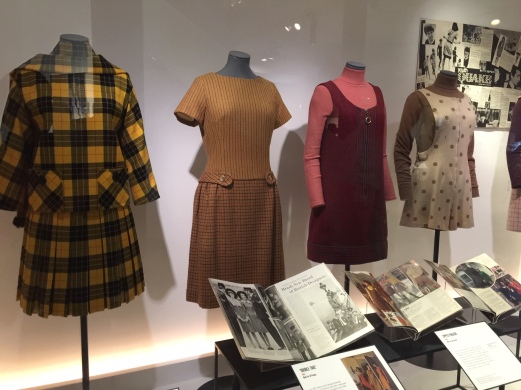 The next photo was completely my scene.  I wore these styles, these colors, and this vibe. 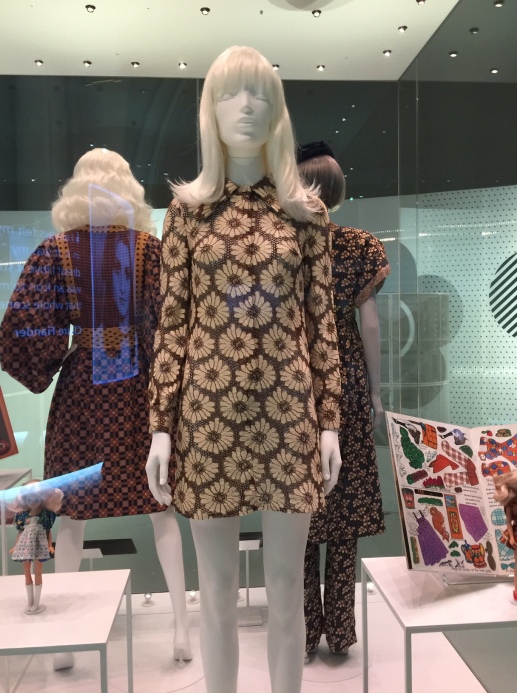 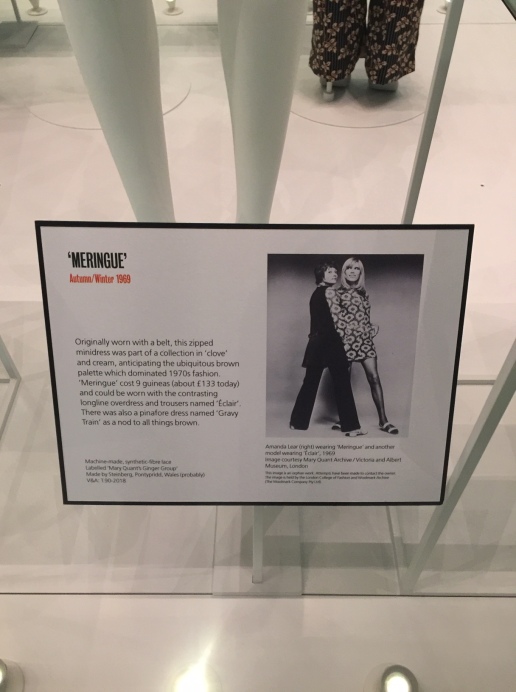 I didn’t know about Mary Quant’s paper dolls, or sticker books, or I would have been seeking them out.  We didn’t have the internet back then, but I bet I could have figured it out, long-hand, so to speak.  I guarantee you that I would have placed an international order with my babysitting money and waited for months to receive my treasures.  This is how I honed my long game, which I still use with great results. 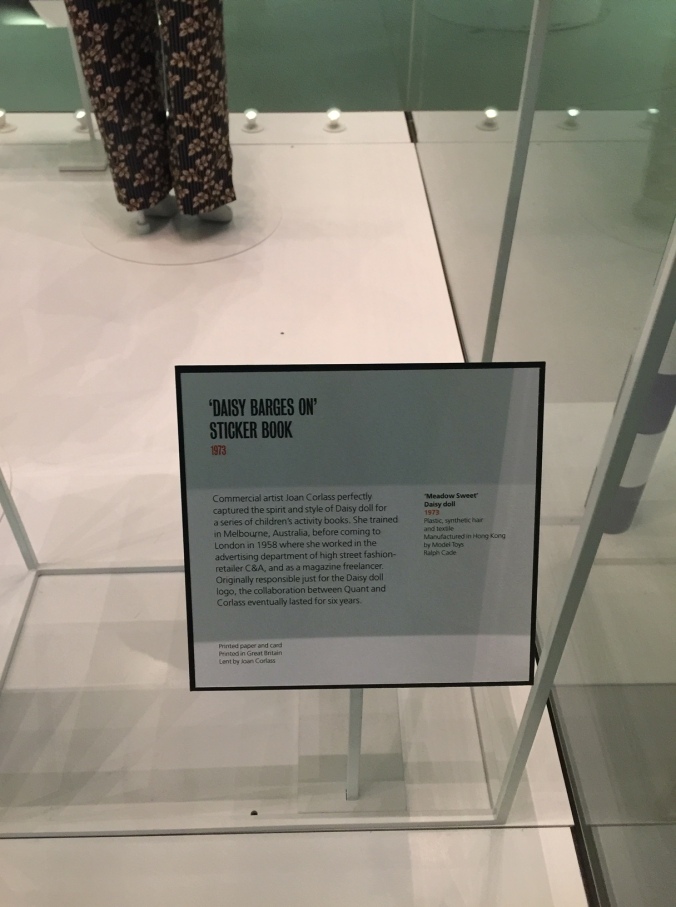 The jersey dress changed fashion.  I’m a big fan and I still wear it. 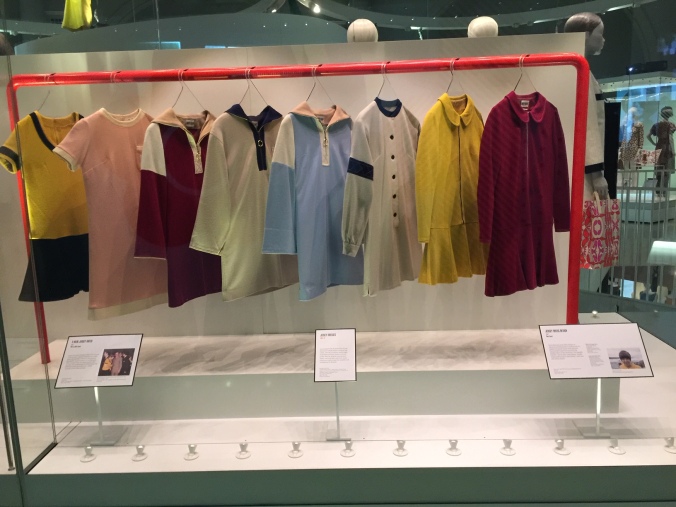 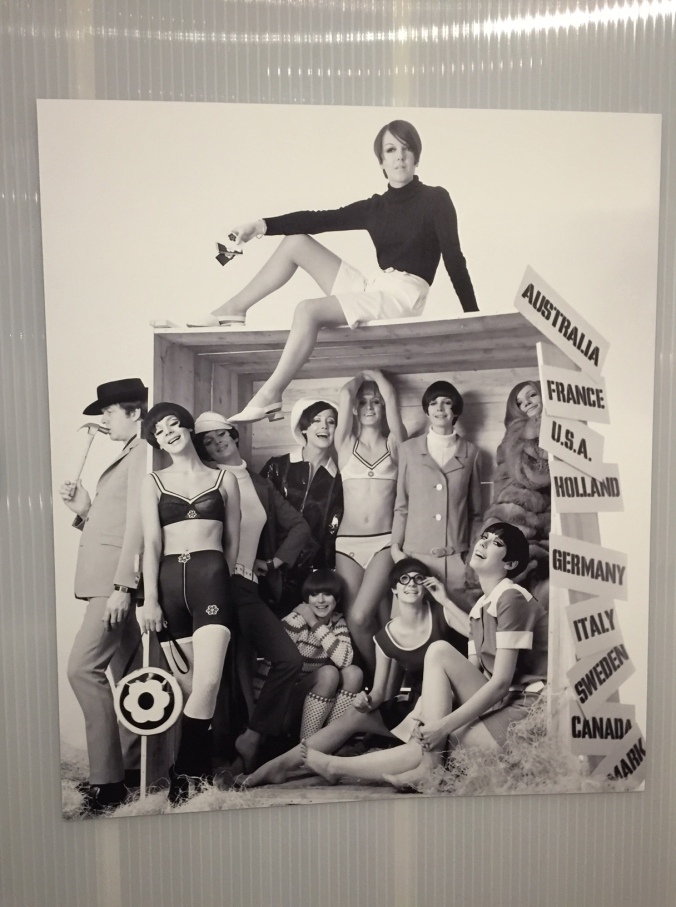 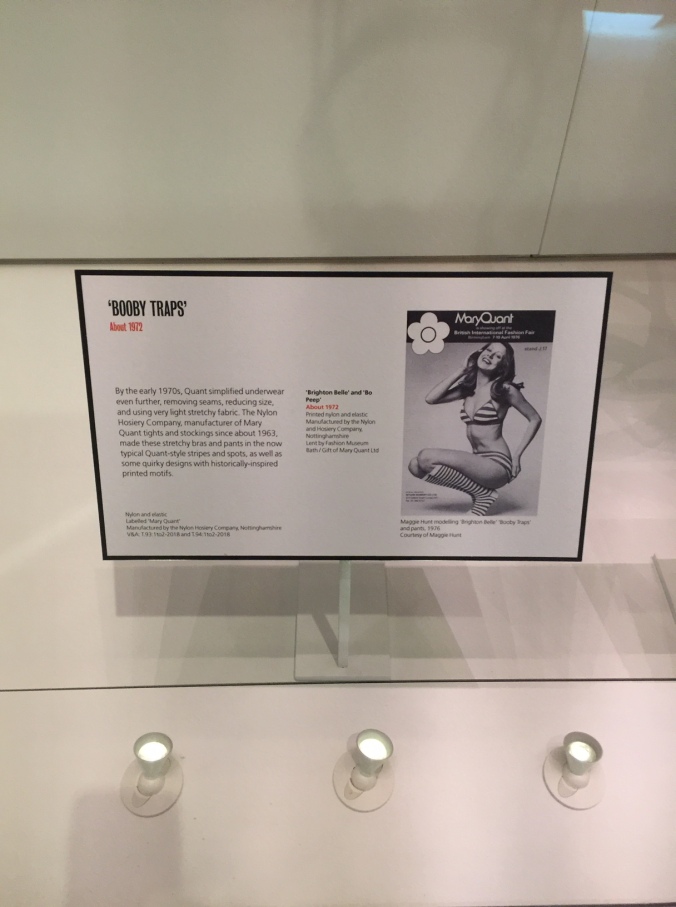 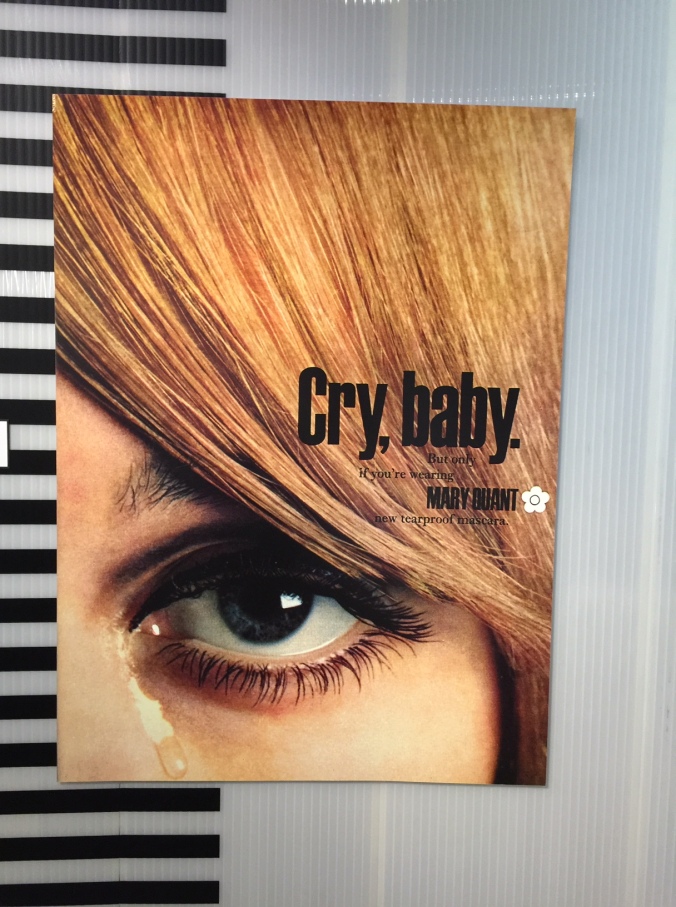 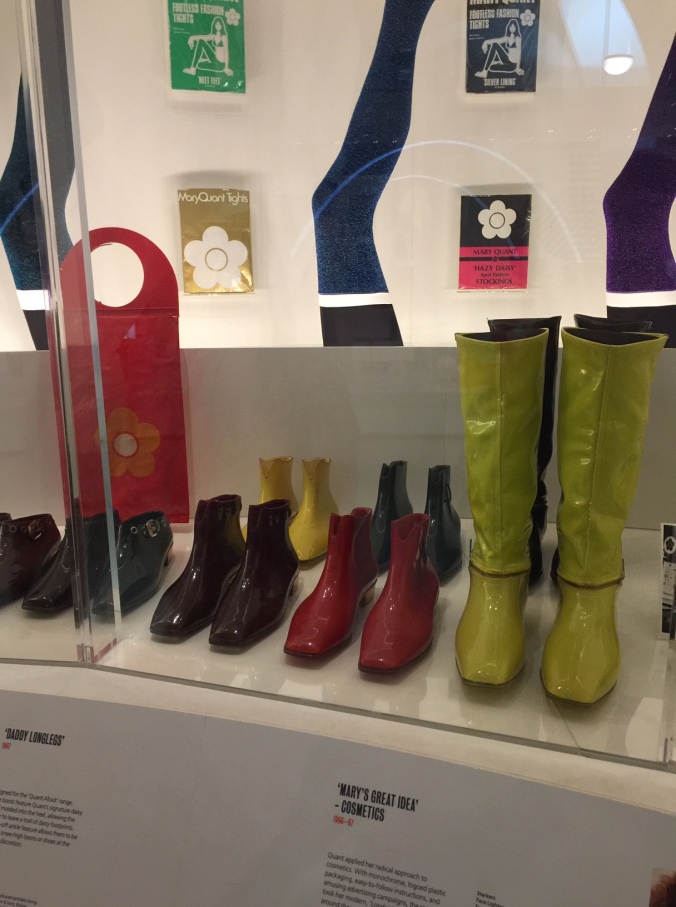 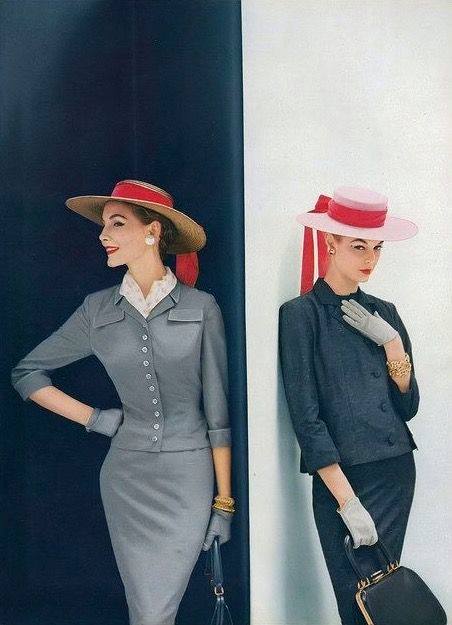 I love and remember the colors of gray and pink/red: the 1950s personified!

BTW, are you watching this great show?

Check out Midge’s adorable coat, hat and gloves ensemble when she and Abe go to Paris to fetch Rose.  Love that look!

Jean Patchett in Mainbocher jacket and floor-length skirt with velvet flowers at the knee.
Photo by Horst P. Horst, 1951