Margaret Bourke-White, one of the pre-eminent photographers of the 20th century, pictured here atop New York City’s Chrysler Building, was born on this day in 1904. A staff photographer for Life magazine since its founding in 1936, one of her photos was featured on the cover of the very first issue of the famous news magazine. For decades, Bourke-White traveled the world photographing key events of her time. Early in her career, she took dramatic pictures of architecture and inside steel mills and factories, pioneering a new style of magnesium flare that allowed her to capture incredible details and earned her national renown. In 1930, she became the first Western photographer allowed to take pictures of Soviet industry during the Soviet five-year plan. Like her contemporary Dorothea Lange, she spent much of the 1930s photographing the downtrodden victims of America’s Great Depression.

When World War II broke out, Bourke-White was the first woman permitted to work in combat zones. She was the only foreign photographer in Moscow when German forces invaded and she captured the bombardment of the Kremlin in a series of dramatic photos. LIFE staff started referring to her as “Maggie the Indestructible” after repeatedly coming under fire and surviving being on a torpedoed ship in the Mediterranean, stranded on an Arctic island, and getting pulled out of Chesapeake Bay after a helicopter crash.

While attached to General Patton’s forces in Germany, she was one of the first photographers to document the horrors of the Buchenwald concentration camp after it was liberated. The following year, she photographed Mahatma Gandhi in India, including taking a now iconic photo of him at his spinning wheel. She is considered “one of the most effective chroniclers” of the violence that erupted during the partition of India and Pakistan. Bourke-White had a reputation for being relentless in her pursuit of the perfect photograph to embody her subject. “I feel that utter truth is essential,” she asserted, “and to get that truth may take a lot of searching and long hours.”

She is also one of the women featured in “Reporting Under Fire: 16 Daring Women War Correspondents and Photojournalists” for ages 12 and up: https://www.amightygirl.com/reporting-under-fire

To introduce children and teens to more trailblazing women like Margaret Bourke-White, visit our “Role Models” biography section at http://amgrl.co/2wRJudE

Credit: This photo of Margaret Bourke-White was taken by her dark room assistant Oscar Graubner.

What a glorious place in Paris!

What a glorious winter afternoon! January 2020. So glad I came to Paris, despite the record breaking long strikes of the Metro system and other things.

What a glorious city!

The Gates of Hell:

The Burghers of Calais:

The Musée Rodin was opened in 1919, primarily dedicated to the works of the French sculptor Auguste Rodin. It has two sites: the Hôtel Biron and surrounding grounds in central Paris, as well as just outside Paris at Rodin’s old home, the Villa des Brillants at Meudon, Hauts-de-Seine. The collection includes 6,600 sculptures, 8,000 drawings, 8,000 old photographs and 7,000 objets d’art. The museum receives 700,000 visitors annually.

From 1908, while living in the Villa des Brillants, Rodin used the Hôtel Biron as his workshop.  He subsequently donated his entire collection of sculptures – along with paintings  that he owned by Vincent van Gogh, Claude Monet and Pierre-Auguste Renoir to the French State on the condition that they turn the buildings into a museum dedicated to his works.

The Musée Rodin contains most of Rodin’s significant creations. Many of his sculptures are displayed in the museum’s extensive garden. The museum includes a room dedicated to the works of Camille Claudel and one of her two castings of The Mature Age.

Just inside the ancient gate of Porta Romano, lies a simple church and attached convent (in Italy, convent can mean monastery or convent or both) dating to the 13th century. An almost unknown (relatively speaking, at least, to the hordes of tourists who descend on Florence every year) masterpiece of  Renaissance paintings is housed here: a beautiful cenacolo, or a painting of The Last Supper. Florence is so fortunately rich in these frescoed depictions of that fateful dinner.

The church dedicated to San Giovanni Battista, in Piazza della Calza, was founded as a hospital in 1362.  There were once many oratories, hospitals and shelters for pilgrims and travelers along the present via Senese and via Romana. These were major roads leading to Florence.

At the end of the 14th century, the convent was established by the Gerosolimitan nuns. They commissioned Franciabigio to paint The Last Supper in 1514 in their refectory. Unfortunately, the sisters soon had to leave the hospital, during the 1529 siege of Florence.

The nuns were replaced in 1531 by Jesuati friars (not Jesuits) who changed the dedication of the church from Hospital of Saint John the Baptist  to San Giusto. They  used the hospital as a charity for children, an ecclesiastic boarding-house, and eventually as a seminary. The church and the convent became known by the name “della calza” (sock) which was a name derived from the long white hoods that the monks wore over their left shoulders. The hood was shaped like a sock and the name stuck.

The picture below is not authentically one of the della calza habits, but it shows the shape of the hood and how it was worn.

From this nickname of “the sock” came the name of the church, the convent, and even the square.

The true hidden gem kept inside is the Cenacolo by Franciabigio, still preserved in the ancient refectory.

Mother Superior Antonia de’ Medici entrusted Francesco di Cristofano, called Franciabigio (1482-1525), to portray a specific scene, during the Last Supper, just after Christ says: “Truly, I tell you, one of you will betray me.”

Franciabigio thus knowing, deep sadness in the countenance of Christ. Judas, the only figure on the outer side of the table, reacts strongly to the words of Jesus: his sudden movement causes his wooden stool to tip over. All around the table, the expressions of the Apostles register various states of confusion.

One can notice each reaction and recognize each Apostle because the artist added their names, painted along the strip which runs above their heads. The painter added here the date A(nno) S(alutis) MDXIIII (A.D. 1514) and his signature, through a twisted shortened monogram (FRAC).

On the painted floor, you can even distinguish the name of the Mother Superior Antonia (SVORA AN), marked on the lower left side, under the table, between the second and third Apostle.

Franciabigio carefully fashioned magnificient details; along the fine linen tablecloth you see ceramic jugs, breadrolls, glasses with red wine, and sliced watermelon. Some of the jugs feature the typical Medici coat-of-arms (the one with the red spheres) referring to Mother Superior Antonia and the Red Cross of the Order of Knights of Malta to whom the nuns originally belonged.

Giorgio Vasari describes (Lives of the Most Excellent Painters, Sculptors and Architects) how Franciabigio “was very keen on studies of perspective” and human anatomy. We see that throughout and especially in the accurate position of the wooden shutters painted along the wall.

A fascinating contrast is given by the dark green wall and the light of the crystal clear sky in the background, where the painter depicted the old Florentine town walls (the destroyed gate of San Pier Gattolino).

For the Jubilee in 2000, the fresco was restored.

Just a quick word about the Church of San Giovanni Battista della Calza:

My quick walk through the church introduced me to this arresting sculpture near the entrance to the small church.

I was alone in the church and had free rein to poke around.  In a small room off the church itself I noticed an amazing della Robbia fountain.  You never know what treasures you will happen upon in this fascinating city.

And, finally, I can’t leave this post without mentioning that, depict the austerity of this church, some major paintings were once a part of the church.  They are now in the Uffizi:

On a recent visit to Padova, I was arrested by some paintings in the Museo Civici, both done by Ginevra Cantofoli.  I vowed to write a post on this intriguing painter, and here it is.  It isn’t much…I hope someday to add more.

All I can add right now is this info from Wiki:

Ginevra Cantofoli (1618–1672) was an Italian painter. She was active in the Baroque period. 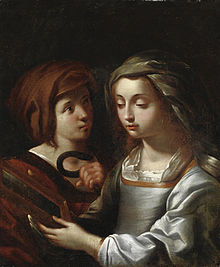 Cantofoli was born in Bologna, Italy in 1618.

Cantfoli received her training as an artist from Elisabetta Sirani in Bologna. She painted works for several churches. These works included a Last Supper for the Church of San Procolo, a St. Thomas of Villanova for San Giacomo Maggiore, and a St. Apollonia for the Church of La Morte.

There’s a fair amount of information available in the public sphere online, including on Youtube.

The actual atelier is featured in  Luciano Emmer’s film Le ragazze di Piazza di Spagna. The film was shot in the Sorelle Fontana’s atelier near Piazza di Spagna in Rome.

Below: Anita Ekberg, testimonial of first perfume “Glory by Fontana” with Zoe Fontana.

In 1954, the film The Barefoot Contessa was released, starring Rita Hayworth and Humphrey Bogart.  I just watched the film on Amazon.it and loved it just for the settings and costumes.  The fashion house of the Sorelle Fontana provided the gorgeous costumes worn by Hayworth and some of the other characters.

The Barefoot Contessa is considered one of director/producer Mankiewicz’s most glamorous “Hollywood” films, but it was produced out of Cinecittà Studios in Rome, Italy. The exterior scenes were shot at Tivoli (the olive grove), Sanremo, and Portofino. The film’s Italian production was part of the “Hollywood on the Tiber” phenomenon.

The Saturday Review called Ava Gardner “one of the most breathtaking creatures on earth.”  It is hard to disagree.

I took a bunch of screen shots of the film to illustrate this post. The pictures aren’t great, but the costumes are.

Dateline: Florence, Tuesday evening around 8 p.m., in my favorite Florentine piazza, Santa Trinita. How this lovely woman can master this space with her voice, while cars and Vespas are whizzing by, is a marvel to me.

Mary Shelley, wife of Percy Bysshe Shelley and author of Frankenstein, wrote of Brunelleschi’s Gates of Paradise in Florence: “Let us turn to the gates of the Battistero, worthy of Paradise. Here we view all that man can achieve of beautiful in sculpture, when his conceptions rise to the height of grace, majesty, and simplicity. Look at these, and a certain feeling of exalted delight will enter at your eyes and penetrate your heart.”