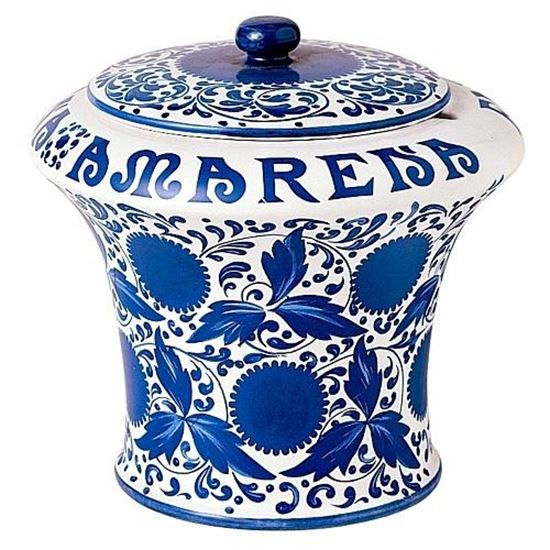 The Fabbri Company of Bologna has been making uniquely delicious “Amarena” cherries in syrup for over a century. Only the best wild Amarena cherries are carefully selected and candied in syrup according to Gennaro Fabbri’s original recipe, created in 1905 in the small Emilia Romagna town of Portomaggiore. 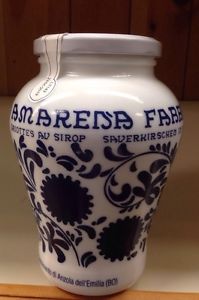 The story of the Fabbri Company begins in that year when Ferrara-native Gennaro Fabbri and his wife Rachele took over an old general store in Portomaggiore, which was in close proximity to a wild black cherry orchard. One day, Rachele picked the cherries and slowly cooked them and semi-candied them in copper pots. She transformed the cherries into a wonderfully delicious treat that soon became known as the Amarena Fabbri.

To thank his wife, Gennaro purchased a ceramic jar from Riccardo Gatti, an artist from Faenza. The unmistakable white and blue ceramic jar has become a trademark of Amarena Fabbri ever since.

The company grew in the 1930s, a decade that marked the arrival of cherries in liqueur and the expansion of the product range to include preserves. Gennaro’s sons, Romeo and Aldo, became increasingly active in the business.

During the post-war years and ensuing economic recovery, the launch of a new product gave Fabbri yet another resounding success: cremolato. The compound pastes in classic and fruit flavors were used to make gelato by simply adding water or milk. The product formed a market niche for Fabbri in which the company remains the undisputed leader.

Fabbri continued producing liqueurs into the 1970s, as well as the other traditional products such as Amarena and fruit syrups. With the increasing popularity of the brand, Fabbri continued efforts to diversify production, adding products for restaurants, cafés and bars to its compounds for gelato, amarena cherries and syrups. In 1999, the company changed its name to “Fabbri 1905 SpA,” commemorating the year in which it was founded.

Today, Fabbri 1905 is run by the fourth generation of the Fabbri family, leading a company of 250 employees that boasts some 17 product lines, 23 packaging lines and distributes products in 110 countries worldwide.

Amarena Fabbri cherries are perfect for topping desserts, yet are equally delicious in savory dishes.

Decadent, delicious and flavorful, Amarena Fabbri cherries are still produced from wild black cherries and are crafted today using the same family recipe developed more than 100 years ago. Amarena Fabbri cherries are enjoyed as a delicious topping for gelato, ice cream, cheesecake and desserts, as well as in a multitude of savory dishes and preparations. They are ideal for mixologists to use in innovative cocktails, especially the famous sparkling Amarena Amore Mio, made with Prosecco.

Whether you are creating a new recipe or simply enjoying them out of their beautiful ceramic vase, Amarena Fabbri cherries will make any dessert or dish a memorable, authentically Italian experience.