During my first walk through Hyde Park and Kensington Gardens, I noticed these markers in the pavement, guiding the visitor to the Princess Diana Memorial.  I wasn’t sure I wanted to go see it.  I remember her death all too well, just like I can remember the day President Kennedy was shot.  Markers of time that I wish I could forget. 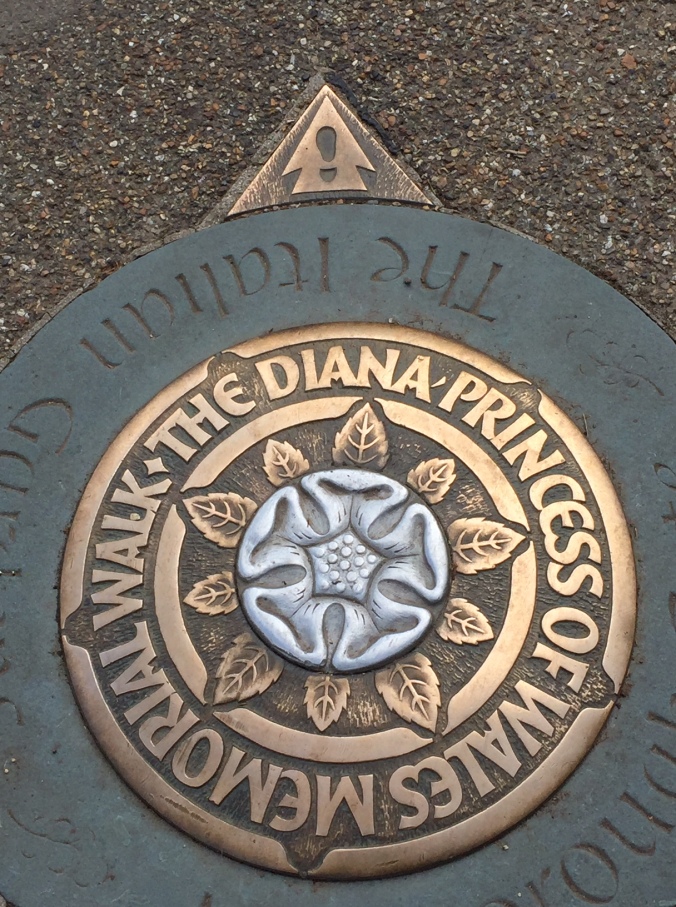 In the end, I couldn’t not go.  I’m so glad I did.  It is a lovely, lighthearted place.  I think Diana would have loved it.  On the sunny Sunday afternoon I was there, families and especially children were enjoying the water as it flowed through the monument.  I loved it.  But, I couldn’t bring myself to take pictures.  It was still too raw for me. 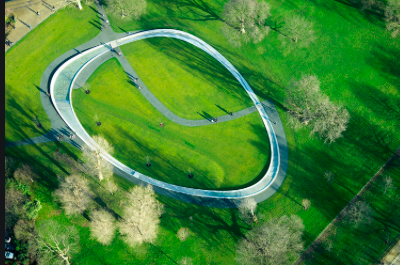 The fountain was built with the best materials, talent and technology. It contains 545 pieces of Cornish granite – each shaped by the latest computer-controlled machinery and pieced together using traditional skills. 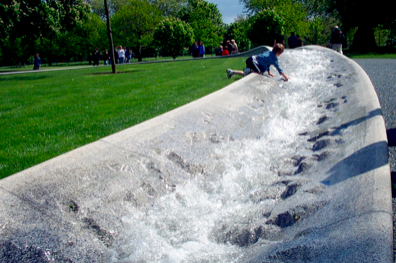 The design aims to reflect Diana’s life, water flows from the highest point in two directions as it cascades, swirls and bubbles before meeting in a calm pool at the bottom. The water is constantly being refreshed and is drawn from London’s water table. 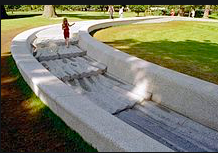 The Memorial also symbolises Diana’s quality and openness. There are three bridges where you can cross the water and go right to the heart of the fountain.

The memorial was designed by American landscape architect and artist Kathryn Gustafson.

The fountain is located in the southwest corner of Hyde Park, just south of the Serpentine lake and east of the Serpentine Gallery. Its cornerstone was laid in September 2003 and it was officially opened on 6 July 2004 by Queen Elizabeth II.  Also present were Diana’s younger brother Charles Spencer, her ex-husband Prince Charles, and her sons William and Harry.

Working on the project began in 2001. The fountain was designed by Gustafson Porter.  Kathryn Gustafson, an American landscape artist said she had wanted the fountain, which was built to the south of the Serpentine, to be accessible and to reflect Diana’s “inclusive” personality. Gustafson said: “Above all I hope that it provides a fitting memorial for the princess and does credit to the amazing person that she was.”

The memorial has the form of a large, oval stream bed about 165 by 260 ft that surrounds, and is surrounded by, a lush grassy field. The granite stream bed is from 10 to 20 ft wide. It is quite shallow and is laid out on a gently sloping portion of the park, so that water pumped to the top of the oval flows down either side. One side of the stream bed descends fairly smoothly to the downhill end of the oval with gentle ripples; the other side consists of a variety of steps, rills, curves, and other shapes so that the water plays in interesting ways as it flows to the tranquil pool at the bottom. The two sides were intended to show two sides of Diana’s life: happy times, and turmoil.