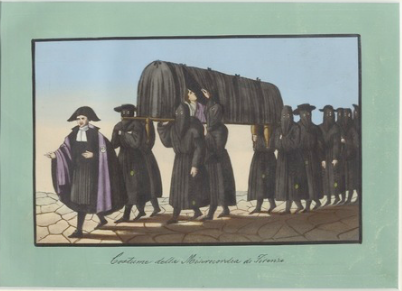 The Venerabile Arciconfraternita della Misericordia di Firenze (La Misericordia) is a lay confraternity founded in Florence in the 13th century by St. Peter Martyr (St. Peter of Verona) with the aim of extending evangelical mercy to the needy.

It is the oldest Brotherhood in Florence dedicated to caring for the sick and, in general, the oldest private voluntary institution in the world still active since its foundation (1244). Its lay members, called brothers, still continue to provide part of the transport of the infirm in the city.

To preserve the egalitarian spirit of the company, all of its members wore long black robes (during the Middle Ages the garments were red) and black peaked hoods that cover the face with two holes for the eyes. With this disguise patients never knew if they were being carried to the hospital by a count or a cobbler. It was only in 2006 that the traditional black dress was relegated for use only in ceremonies, due to national regulations.

For a century or so, the confraternity shared space with the Compagnia del Bigallo. In 1525, the Misericordia moved elsewhere; but in 1576 it moved to the corner of Via Calzaiuoli, where it has remained ever since.

The Venerable Archconfraternity of Mercy, which has never known a single break in its charity work since its foundation, was established “for the purpose of assisting and accompanying the sick and the accident-prone to hospital and removing bodies from the street”. The latter role was crucial during such disasters as flooding or the plague. The company also collected alms to help poor girls marry and to the bury the dead.

When the association was founded in the 13th century, it was a time when family feuds and plagues were leaving a high number of disabled and dying people in the streets. This group of volunteers banded together to carry the wounded to hospitals and the dead to cemeteries.

The headquarters for the Misericordia is in Piazza del Duomo 20 across the street and to the right of the Cathedral. Even if you’re not in need of any medical attention, you’re welcome to visit the headquarters and the church. It’s customary to leave a small donation. But, whatever you do, don’t fail to visit the museum.  It’s hardly known and here, in the heart of Florence, where the hordes of tourists congest the city, you’ll be almost alone. 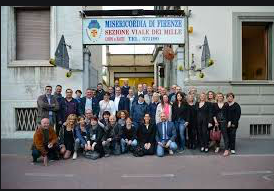 I highly recommend a visit of at least an hour to this interesting place; you will learn all kinds of things about the history of Florence and medicine here.