Milano’s beautiful Palazzo di Brera was created along with the Accademia di Belle Arti in 1776 to serve the students studying at the University.

The Jesuits built the Baroque palace at the end of the 17th century as a convent (the word convent is used for monasteries in Italy). After they were unceremoniously expelled, the  Palazzo Brera was remodeled in the neoclassical style.

Napoleon took control of Italy and declared Milan the capital.  He filled the Brera with works from across the territory. As a result, it is one of the few museums in Italy that wasn’t formed from private collections, but rather by the Italian state.

When the Palazzo di Brera was taken away from the Jesuits by Queen Maria Teresa of Austria, it was meant to become one of the most advanced cultural institutions in Milan. It still lives up to that status today. Besides the Academy and the beautiful Art Gallery, the palazzo holds the Lombard Institute of Science and Literature, the Braidense National Library, the Astronomical Observatory and a Botanical Garden maintained since he 1700s.

Inside the cortile, Canova’s heroic statue of Napoleon: 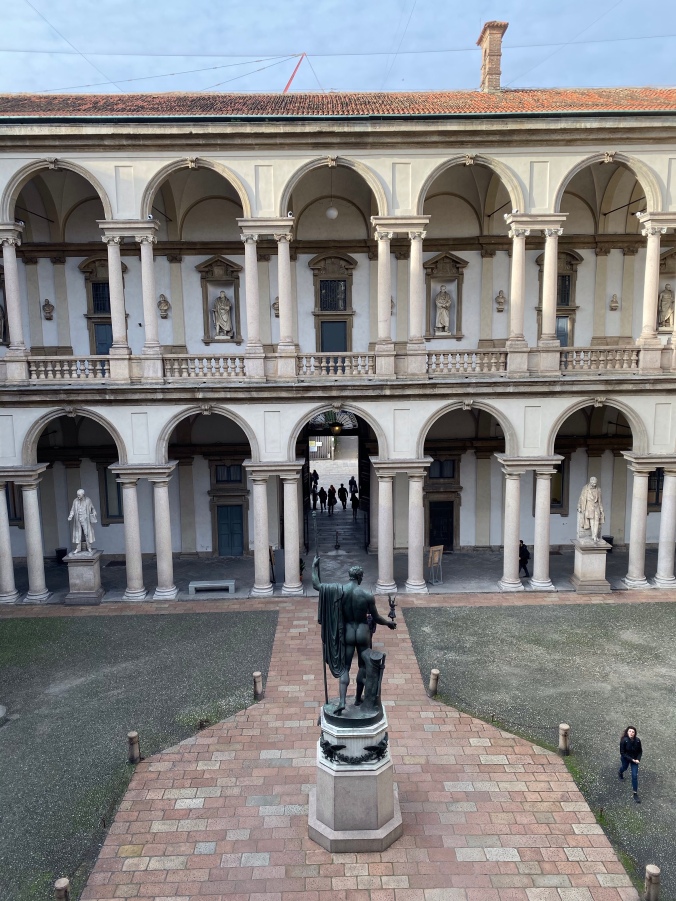 The entrance to the palazzo: 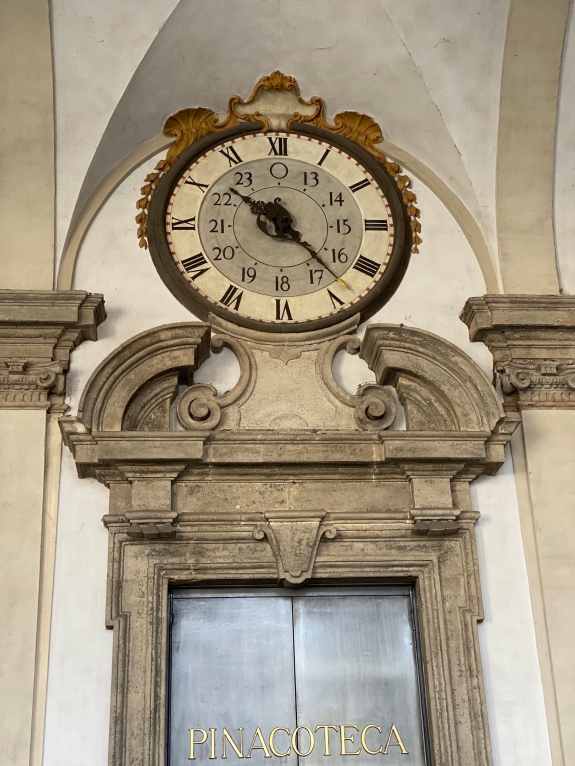 There is a garden at the back of the palazzo.  The fortified walls and turrets of the building complex seen back here are massive and medieval, and very unlike the sophisticated facade of the palazzo. This Orto Botanico comprises a tiny corner of the hectic city has aromatic herbs, wildflowers and a small vegetable garden for research. 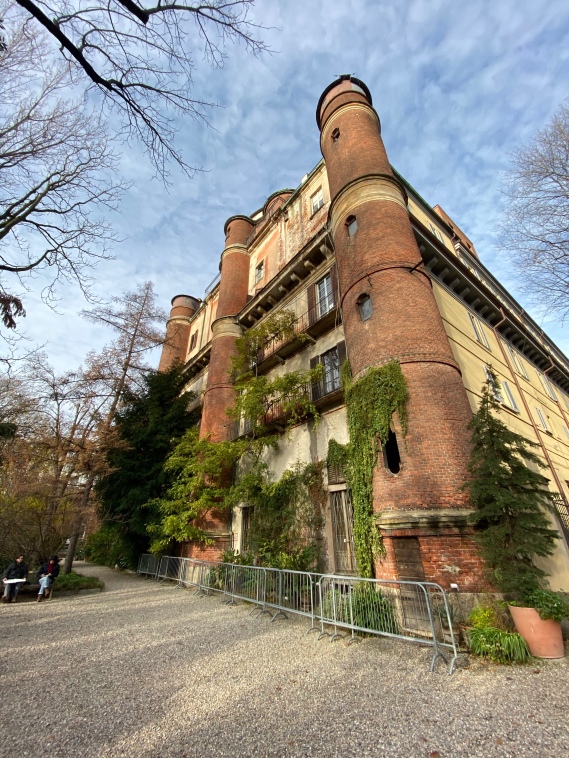 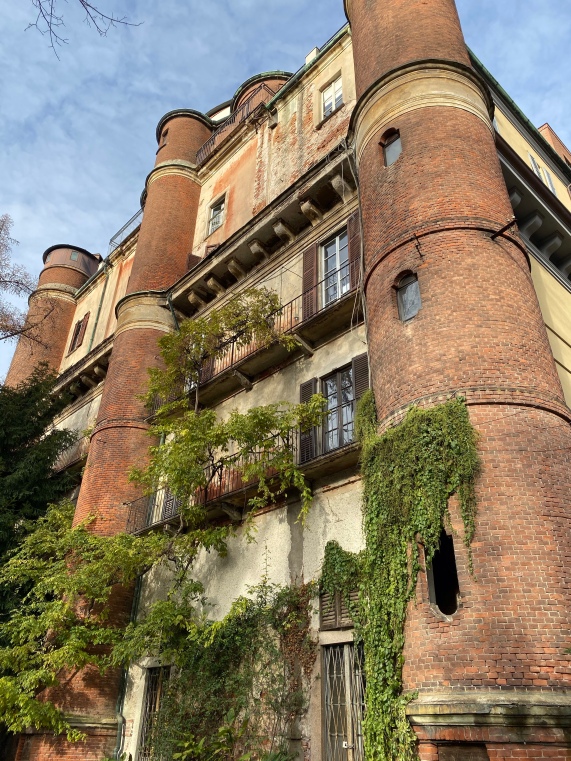 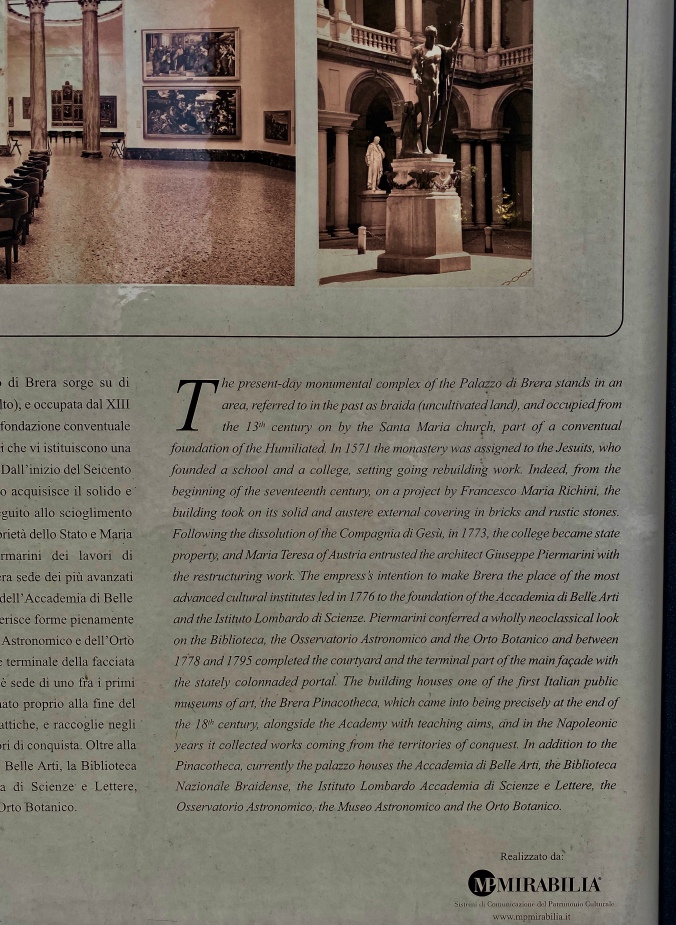 The Palazzo di Brera started life as a Jesuit college built on green land just outside the old city walls and its name reflects the location. In fact, the district, palace, and gallery all take their names directly from their locale as the Medieval dialect. The word “brayda” means “grassy clearing”. The word slowly evolved into “brera” or “bra;” it is also the root word of Vernona’s Piazza Bra.

Inside the Palazzo di Brera resides the beautiful Biblioteca Braidense: 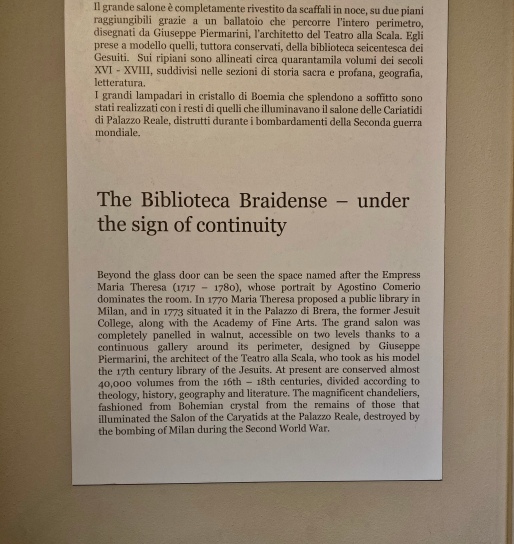 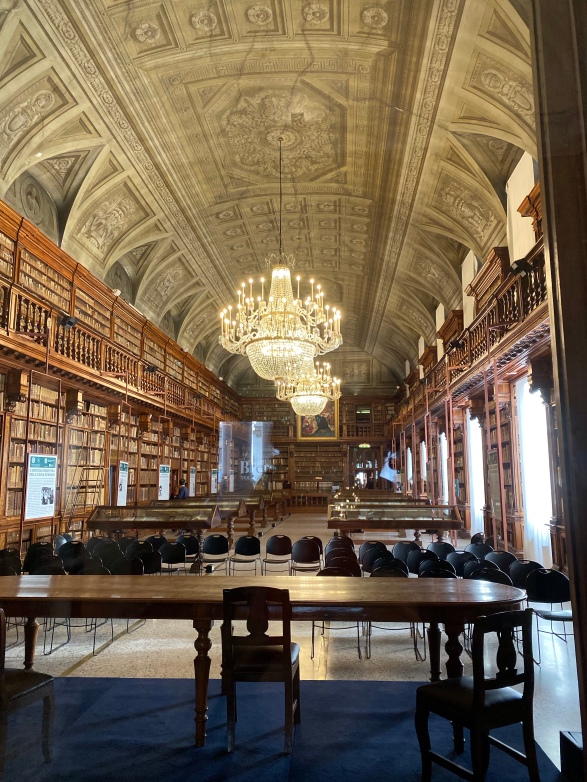 More about Canova’s statue of Napoleon:

The plaster model for the bronze statue: 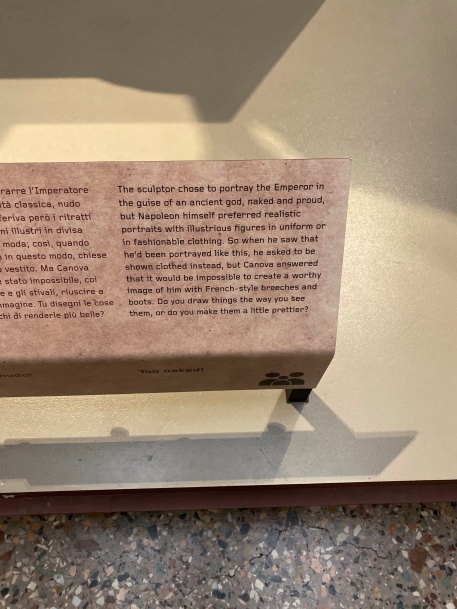 What caught my eye at the Brera?  These works:

Andrea Solario, Madonna of the Carnations: 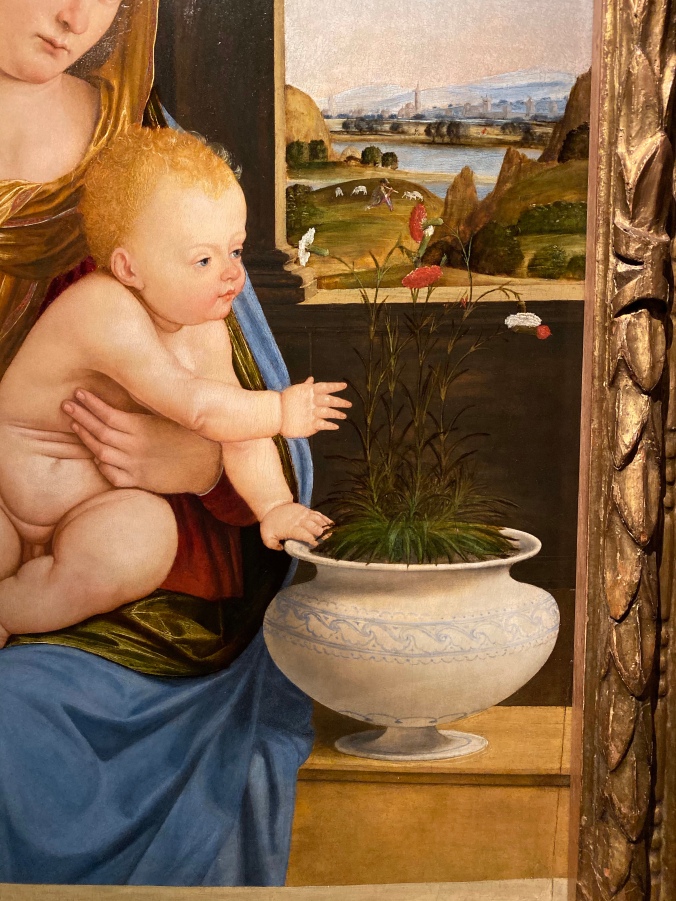 I loved Carlo Crivelli’s amazing panel paintings, which are actually somewhat 3-d.  I’ve not seen that before in paintings of these kinds: 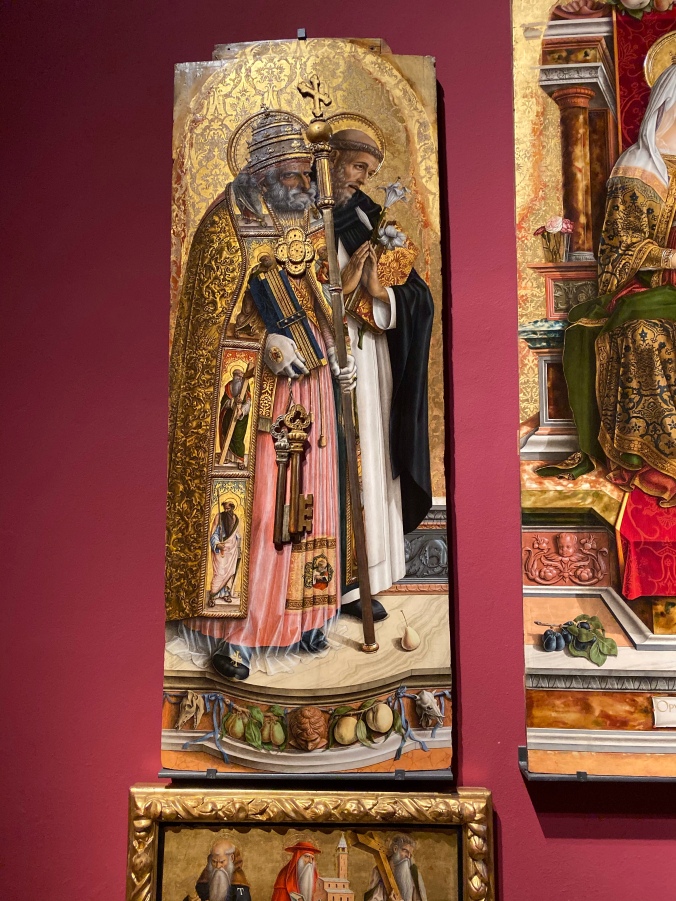 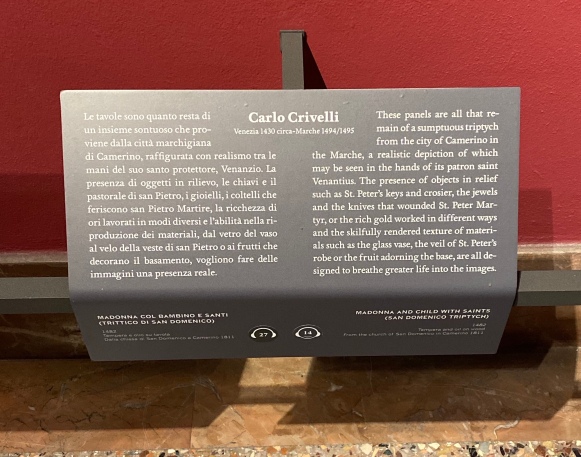 Another luscious work by Carlo Crivelli: Madonna and Child.

Some of the altarpieces in the Brera collection are sumptuously beautiful; breathtaking, actually. 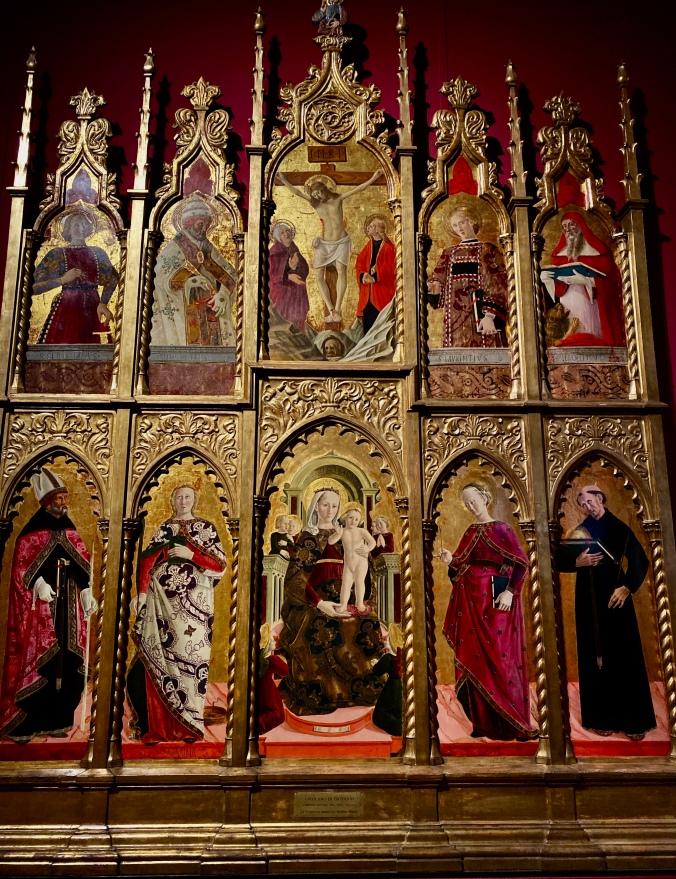 This random lion caught my eye and I don’t even remember from what painting!  I was a bit agog at the Brera. I started feeling the Stendhal syndrome, big time. 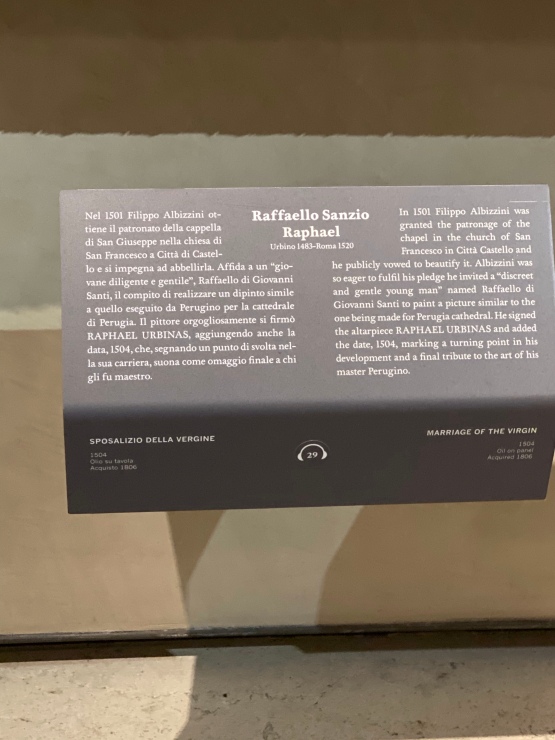 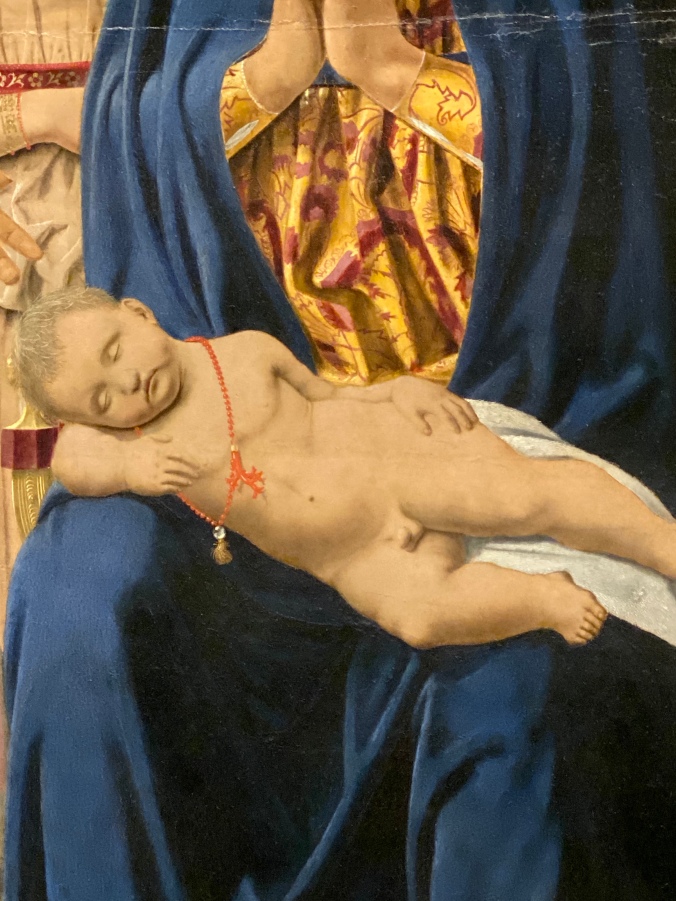 A ubiquitous scene, all over Europe: