Right in the heart of Florence, on its famed Via Tornabuoni, sits Procacci, one of the city’s oldest delicatessens and a lovely meeting place.  The decor maintains its vintatge appeal. Procacci was founded in 1885, and quickly became acclaimed among Florentines, especially for its culinary specialties with truffles and its famous sandwiches.

It’s a heavenly little spot for a prosecco of an afternoon, with a truffle sandwich on specially made, fluffy buns.  What a treat! 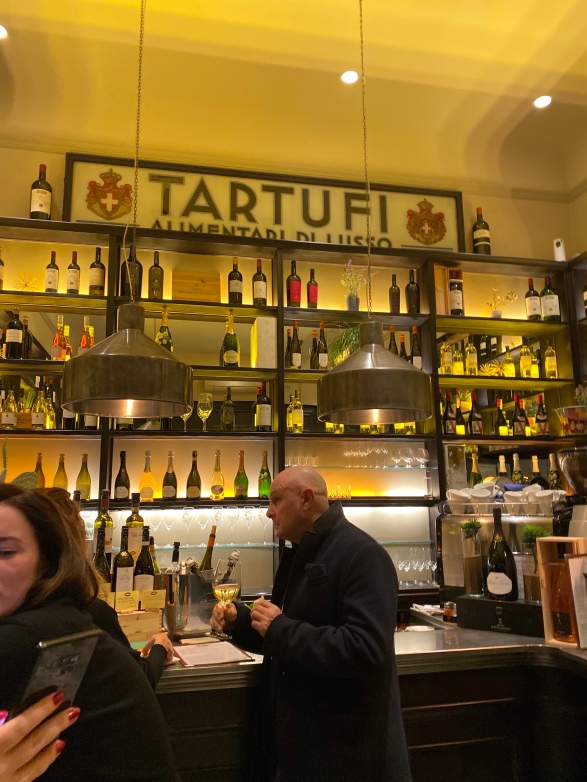 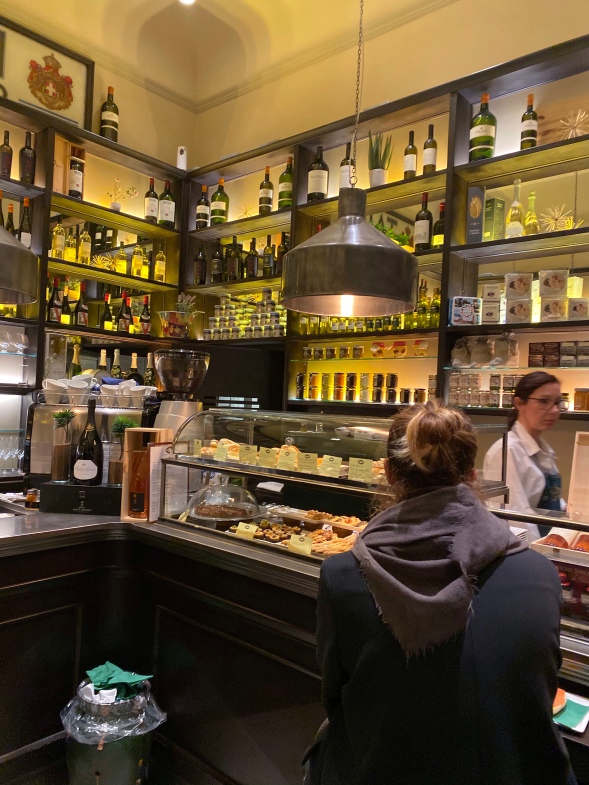 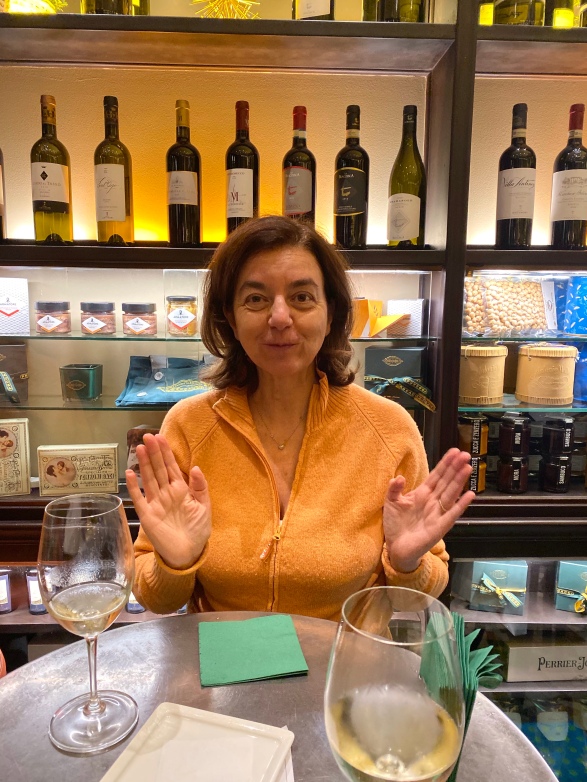 Patrizia, one of my favorite Florentines!

The tastes of fall in artiginal gelato/sorbetto.  Nothing could be finer! 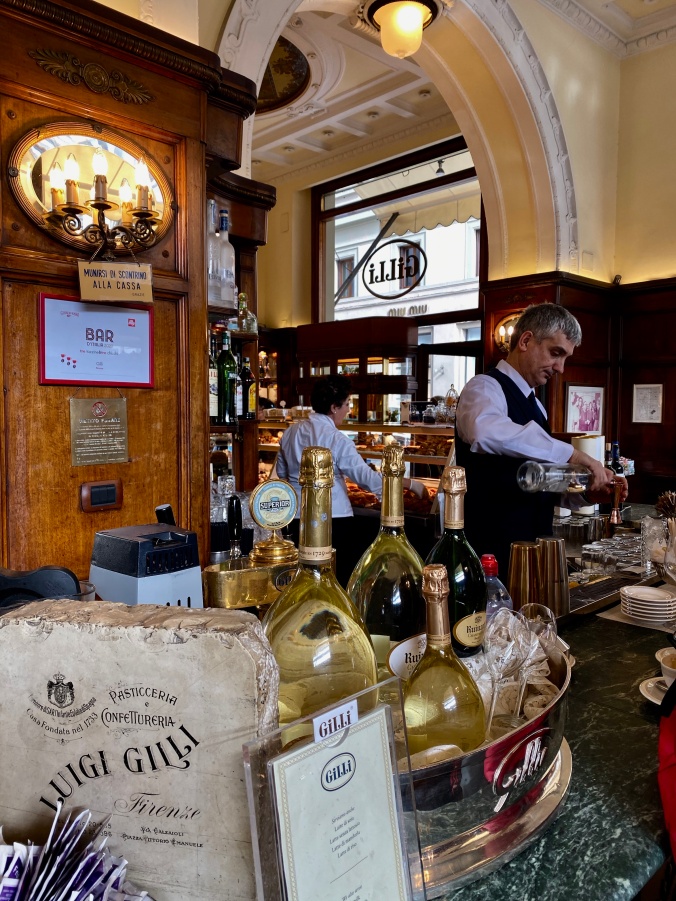 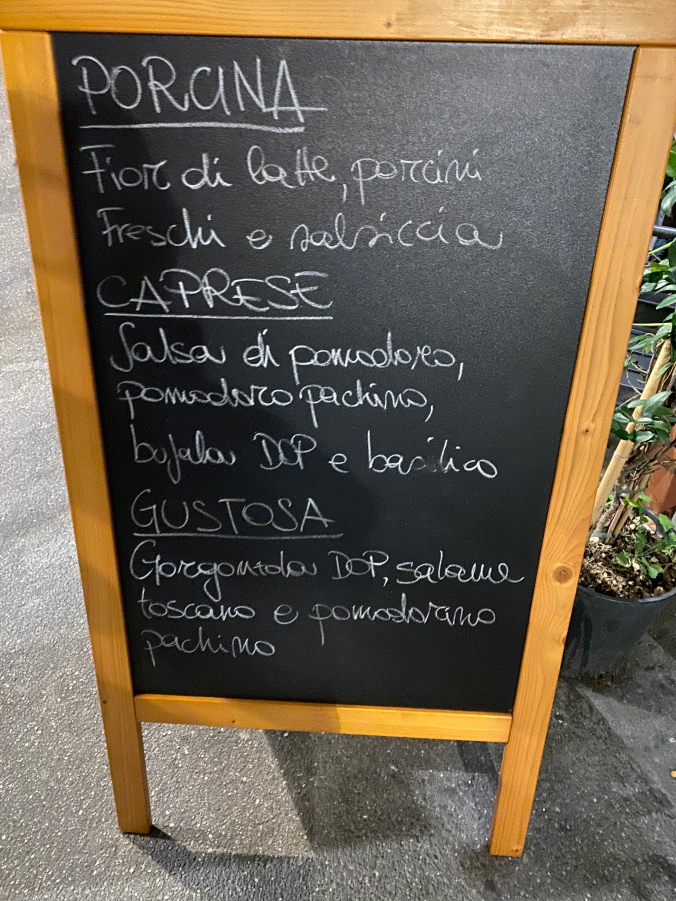 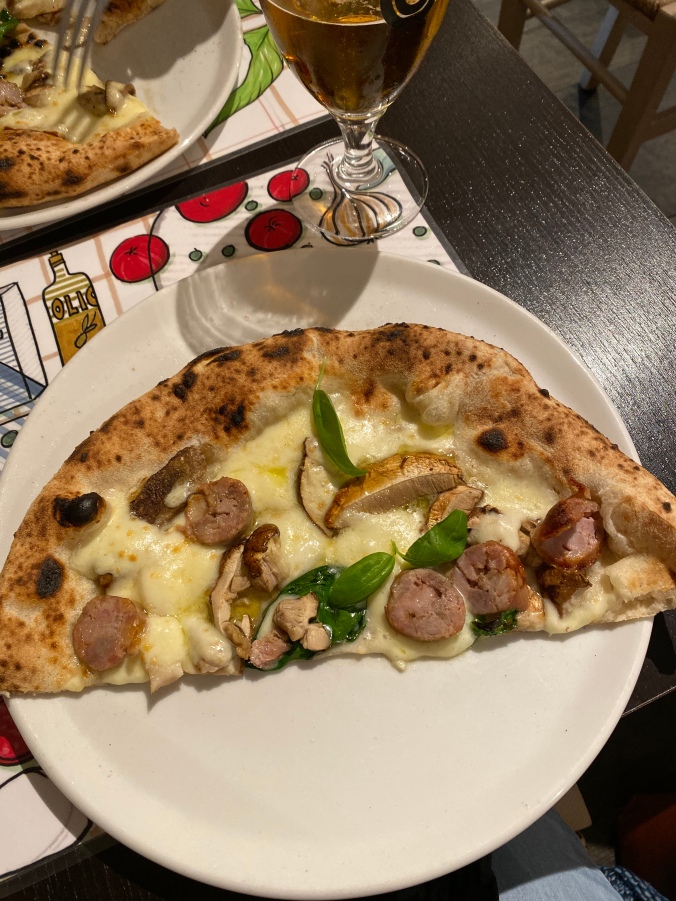 Ask anybody who visits Florence: is gelato important there?

Why, certo! Gelato plays a key role in Florence’s history. In the 16th century, a man named Ruggeri, a Florentine poultry seller, who liked to cook as a hobby, took part in a competition put on by the Medici between the best chefs of Tuscany for the “most original dish ever seen.” His “sorbet” ended up winning over all the judges and he and his recipe gained instant great fame.

Also in 16th-century Florence, Bernardo Buontalenti, a famous architect, sculptor, and painter, who also loved cooking, was asked to prepare lavish banquets. His delicious zabaglione cream and fruit were an enormous hit, the start of the famous “crema fiorentina” and “gelato buontalenti” still around to be enjoyed in all of Florence’s top gelato spots.

Venchi (via dei Calzaiuoli, 65/R): a gelato made with select ingredients, like hazelnut (exclusively from I.G.P. Piedmont hazelnuts) and the famous “Venchi” chocolate they make themselves.

Dei Neri (via dei Neri, 9/11): a great variety of flavors, including some original ones, and gelato-based creative pastries.

La Carraia (piazza Nazario Sauro, 25/R): a secret, exclusive recipe, all natural, makes its gelato one of Florence’s most famous.

Grom (via del Campanile, 2): fresh fruit only, from the farm of the owner, uses no dyes, flavorings, preservatives, or emulsifiers for a gelato like “the days of yore.”

And, hand’s down, my favorite ice cream in Florence is “Buontalenti” from Badiani.  It is second to none.

In Maremma no one picks olives before November 2 (All Souls’ Day), by which point the green has begun mottling into black. This is why Tuscan olive oil is so justly famous; Umbrians and Apulians, by contrast, wait for the fruit to fall before they gather it, which makes their oil more acidic.

Usually it took us about three weeks, working six hours a day, to harvest our olives (from 38 trees). Once we were done, we’d pack them in plastic crates and haul them to one of the two frantoi (olive presses), this one located in a warehouse behind the consorzio agrario.

In the room through which you entered, tons of olives, either loose or in burlap bags through which a little moisture was already seeping, waited to be weighed and pressed. There would be at least one truck parked outside, bearing the immense crop of one of the larger aziende, a thousand kilos in comparison to which our five crates seemed meager.

Still, we gave them to the frantoiano to weigh, and he told us to how much oil we were entitled, using as the basis for his calculations a mysterious algorithm that took into account not only the quantity of olives but their relative oiliness in comparison to other years (on average, about twenty percent of the weight of the fruit). We’d nod acceptance of his terms.

Then he’d take our olives and throw them onto the pile with all the others, for generally speaking only huge crops were pressed individually; in the case of small harvests, the olives of several different families would be mixed together, which meant that one could never say truthfully, “This oil is mine,” though of course everyone said it anyway. Having deposited our olives, we followed the frantoiano into the next room, where the machinery itself was located.

This consisted of a huge tub and a stone grinding wheel, operated not by hand, as in the last century, but by a sophisticated system of gears. For sheer scale, it was daunting. The wheel was easily twice the size of the Bocca della Verità in Rome.

As for the tub: if you fell into it you would certainly be crushed in a matter of seconds. At the bottom, a muddy sludge of olive residue shifted and churned, while from its side a stainless steel pipe led to a series of distillation tubes and then to a tap from which a stream of oil was always pouring.

The oil was such a deep shade of green that you could not see light through it unless you held the bottle up to the sun. It gave off a slightly mulchy odor. This was the cold-pressed “extra virgin” oil for which Tuscany is famous. Later, the pulp would be pressed a second time, producing a paler oil; later still, the crumbly residue, by now the texture and color of potting soil, would be forced, thanks to the addition of certain chemicals, to yield yeta third grade of oil, almost colorless and used chiefly for deep frying.

Next the frantoiano—Paolo) who in the summer worked at the Bar Sport, and in the spring did construction at the Terme—asked us if we wanted to take our oil then or wait until “our” olives were pressed. We told him that now would be fine, at which point he began to fill our thirty-liter stainless steel oil urn.

One of our neighbors, a farmer with a lot of land, walked in and greeted us. We would have felt intimidated by his bigger harvest (this is the curse of masculinity) had not a tiny old man followed him in. In his right hand he held a straw basket containing at most twenty olives, in his left a biberon—a baby bottle.

Have you seen this series of videos?  I just discovered them through the one on Monet and I loved it!

One of the hundreds of interesting things you see when walking around the city of Florence are these small windows, measuring about 12 inches wide by 15 inches tall, cut into the masonry of some major palazzi.  There are hundreds of them in Florence.

The buchette del vino (“small holes [for] wine”) were added to the buildings by entrepreneurial families who produced wine on their country estates and thought to themselves, “why not sell some in Florence on a glass by glass, or a refilled bottle by bottle, basis?”

Together, these windows form a collection of Renaissance-era vestiges of a once-popular and admirably no-fuss form of wine sales.

Without exception, I have never seen one of these windows open.  They are usually boarded up, sometimes in quite decorative ways.

But now, an organization is working to preserve—and help reopen—the city’s “wine windows.”

“These small architectural features are a very special commercial and social phenomenon unique to Florence and Tuscany,” Matteo Faglia, a founding member of the Associazione Culturale Buchette del Vino, told Unfiltered via email. “Although they are a minor cultural patrimony, nevertheless, they are an integral part of the richest area of the world in terms of works of art and monuments—Tuscany.”

The buchette first came into vogue in the 16th century, when wealthy Florentines began to expand into landowning—notably, owning vineyards—in the Tuscan countryside. The aristocrats’ new zeal for selling wine was matched only by that for avoiding paying taxes on selling wine, so they devised the simplest model for wine retail they could: on-demand, to-go, literally hand-sold through a hole in the wall of their residences.

It was convenient for drinkers, too: Knock on the window with your empty bottle, and the server, a cantiniere, would answer; upon receiving the bottle and payment, he would return with a full bottle of wine. Buchette eventually became popular enough that nearly every Florentine family with vineyards and a palace in Florence had a wine window, and soon the trend spread to nearby Tuscan towns like Siena and Pisa.

The windows stayed open for the next three centuries, but by the beginning of the 20th century, more social wine tavernas had spread throughout the city, with better-quality wine, better company and equally easy access to a flask.

By 2015, most Florentines had lost track of their wine windows, if not vandalized them. That year, the Associazione was founded, with a mission to identify, map and preserve the buchette—nearly 300 catalogued so far.

And this summer provided a new boost to their work: One restaurant has cracked open its buchetta anew for business. Babae is the first restaurant to re-embrace the old tradition, filling glasses for passersby through their buchetta for a few hours each evening.

It’s a welcome development to the lovers of wine windows. “Although the ways of selling wine have obviously changed since the wine windows were fully active … this small gesture, which highlights a niche of Florentine history, is very welcome,” said Faglia, “to help to keep alive this antique and unique way of selling one of Tuscany’s most important agricultural and commercial products: its wine.”

This new association even has a Facebook page: https://www.facebook.com/buchettedelvino/